About the Lighthouse Prints

In 1995, with the co-operation of the Canadian Coast Guard, I found out there were 35 lighthouses still being manned along the coast of British Columbia as well as another 12 odd that had been decommissioned. I decided that I would render only the manned stations. I have seen a few of the unmanned stations and decided that they had issues that were not appealing for me: fences around the perimeter, service buildings torn down, and others, a general appearance of abandonment. It is interesting how the lack of keepers can cause a location to loose the lived on and in atmosphere.

I settled on an edition of 75 prints for each of the Stations, starting with the 9 Lighthouses along the West Coast of Vancouver Island. Then came the 15 Lighthouses in the Inside Straits from Victoria to Port Hardy. The final group of 11 were the Northern Lighthouses starting from Pine Island north to Langara on Haida Gwaii. All lighthouse prints have a generous 11⁄2 ” to 2 1⁄2“ border of Hosho Paper beyond the image with the deckle edges. 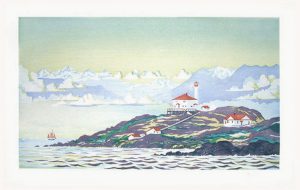